SWRL2 study objectives were to examine trends in water quality since 1988–89 and collect baseline data for emerging contaminants. 473 private rural drinking water wells were sampled in 89 Iowa counties. 116 of the wells were original SWRL study wells; the other wells were randomly selected from the Iowa Department of Natural Resources Private Well Tracking System. 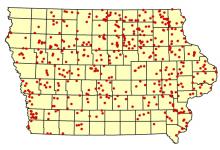 Findings from all of the sampled wells  include:

Pesticides (parent compounds): 8% had atrazine at very low concentrations; 2% had metolachlor; acetochlor, alachlor and trifluralin were detected in <1% of wells

Health Assessment: This study did not set out to assess health risks associated with consumption of well water in Iowa. While some analysis showed levels of certain contaminants exceeding maximum contamination levels (MCLs) for public drinking water supplies, water quality in private drinking water wells is not regulated. Study-wide, no parent herbicide concentration was found to exceed a public water MCL. Herbicide degradate values were generally found at very small levels -- the mean for all degradates was 0.7 parts per billion (ppb) or less, with maximum values at 7 ppb. There are no established MCL values for degradates which are generally believed to be less toxic than their parent compound.