The Center for Health Effects of Environmental Contamination (CHEEC) and researchers from the University of Iowa’s College of Engineering provided updates on testing and research investigating lead contamination of drinking water in Iowa’s private wells, elementary schools, and residential communities.

The U.S. Centers for Disease Control and Prevention (CDC) states that no level of lead exposure is safe for children. The toxic effects of lead are well known, and elevated blood lead levels (BLLs) are linked to adverse health and developmental effects, especially in young children. The American Academy of Pediatrics (AAP) recommends reducing or eliminating all sources of lead before exposure as the most reliable and cost-effective measure to protect the public.

“Historically, there has been no federal law requiring testing of drinking water in schools and child care facilities,” said CHEEC Director David Cwiertny.  “The Environmental Protection Agency recommends schools and child care facilities to prioritize remediation efforts based on lead sample results and to use the steps described in their 3Ts toolkit to reduce lead concentrations to as low as possible.”

Between 2019 to 2020, CHEEC supported testing in eight elementary schools in Dubuque, Jones and Keokuk counties. In total, more than 400 individual outlets were tested across these schools. Although most drinking water outlets tested were found to be safe with concentrations below 1 ppb for lead and 1.3 mg/L or parts per million (ppm) for copper, several outlets in each school were found that had unsafe levels of lead or copper. Lead was the most commonly detected contaminant with concentrations ranging from 1 to 14 ppb. Schools used CHEEC funding to replace old water fixtures; install new, lead-free drinking water fountains and bottle fillers with carbon filters; and to post signage at low priority locations to warn against drinking water from outlets. On average the cost of all testing and remediation per school was $2,800.

The presentation also described the work of the Get the Lead Out Iowa (GTLO) campaign, a mail-in service testing for lead, copper, and other water quality measurements (such as nitrate and arsenic) in tap water of Iowans.

Lead is regulated under the Safe Drinking Water Act through the Lead and Copper Rule (LCR). A recent study by UI Professor of Civil and Environmental Engineering Michelle Scherer, which was supported through the CHEEC seed grant program, analyzed Iowa’s LCR data to assess lead exposure through drinking water across the state. Based on analysis of over 165,000 tap water samples from community water systems, the researchers estimated over 65,000 Iowans were at risk from drinking water lead above the U.S. EPA action level of 15 parts per billion (ppb) each year.

The researchers also found that private wells were at risk.  “There is limited data on lead in private wells in Iowa.  Private wells are not regulated and are at higher risk for lead,” said Professor Scherer, who is also a co-founder of the Get the Lead Out of Iowa campaign. “We found that 9% of households with private wells had lead concentrations that exceed the EPA’s action level compared to 3% of homes that get their water from a community water system.”

Private water systems fall outside the jurisdiction of the Safe Drinking Water Act (SDWA) that governs public water, and therefore there are no routine testing and treatment requirements (or recommendations) for private wells.  It is the well owner’s sole responsibility to ensure the safety of their water.

Below are the researchers’ presentations and fact sheets related to lead contamination in Iowa. 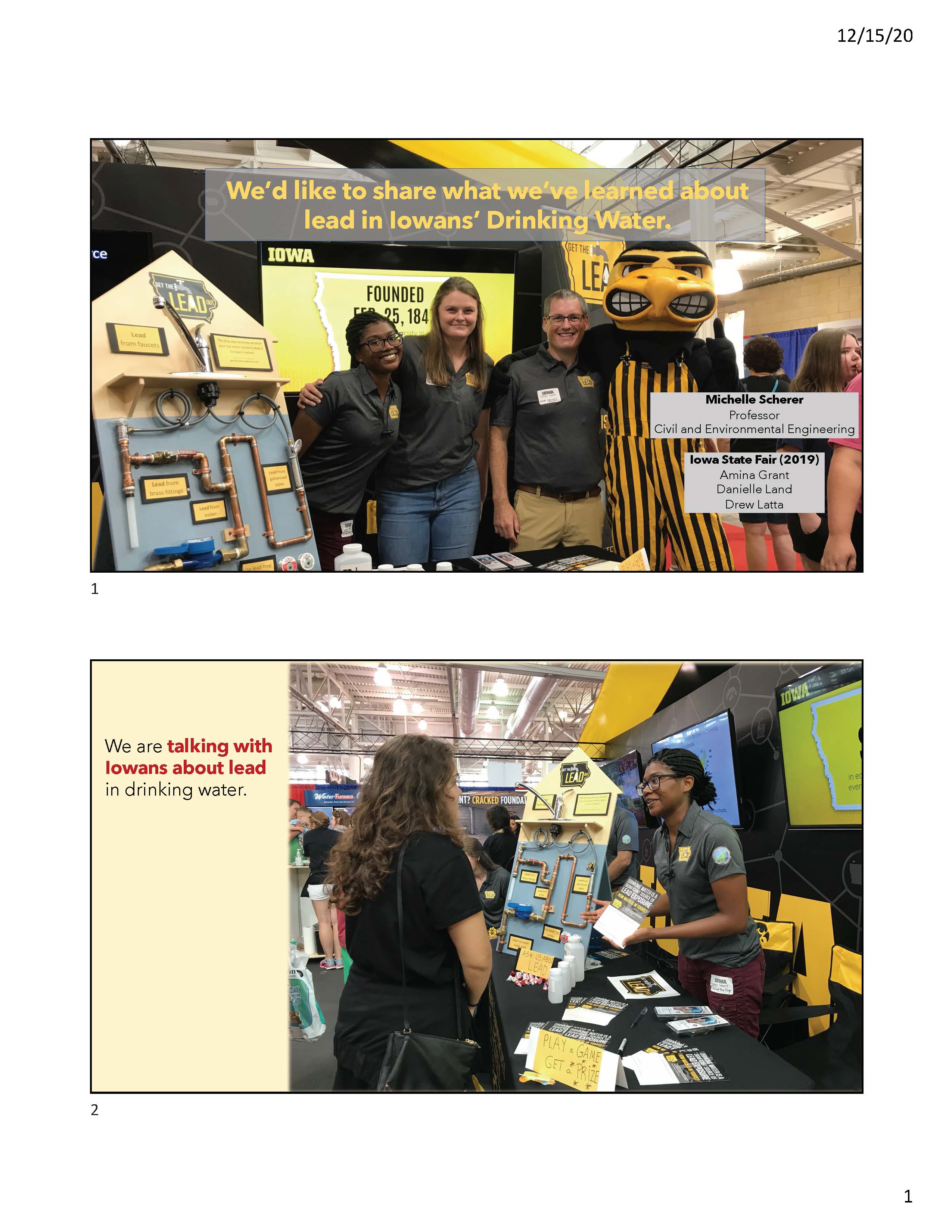 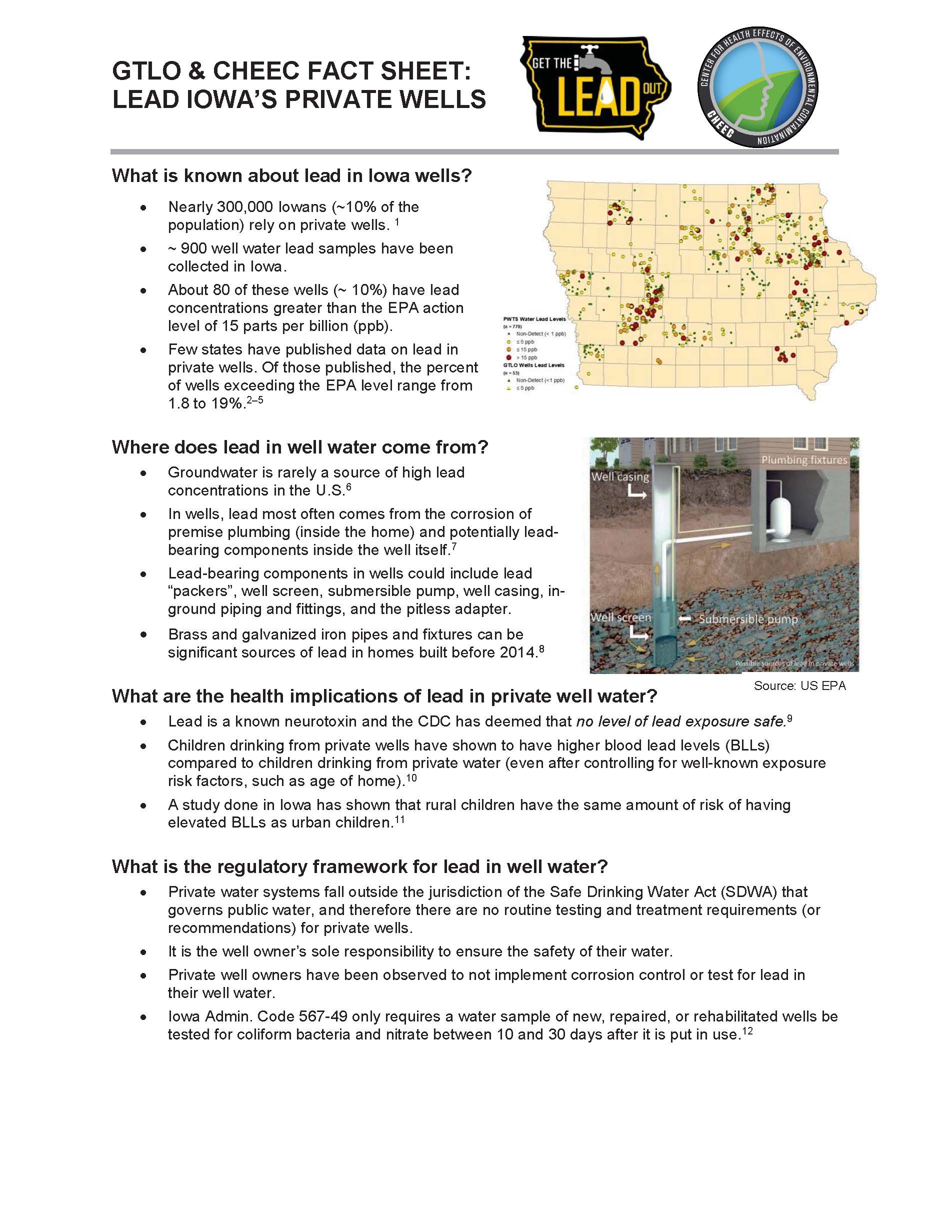 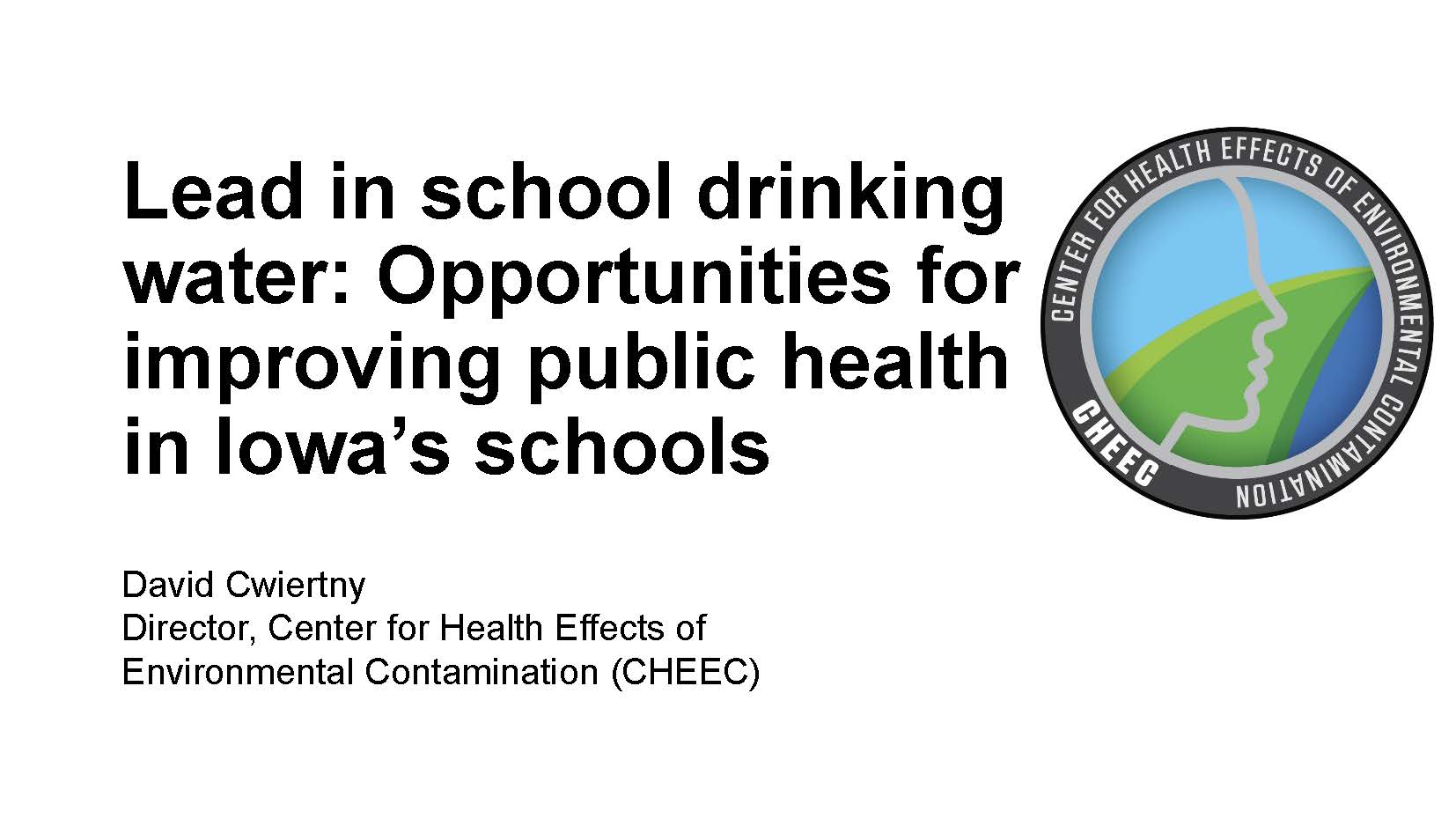 For more information, visit https://cheec.uiowa.edu or email cheec@uiowa.edu. CHEEC is part of the University of Iowa Office of the Vice President for Research, which provides researchers and scholars with resources, guidance, and inspiration to secure funding, collaborate, innovate, and forge frontiers of discovery that benefit everyone. More at http://research.uiowa.edu, and on Twitter: @DaretoDiscover.

Media Note: Media interested in interviewing the study’s researchers should contact Strategic Communications Director Stephen Pradarelli in the Office of the Vice President for Research at 319-384-1282 or stephen-pradarelli@uiowa.edu.